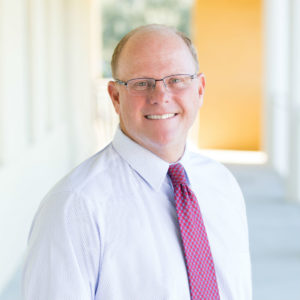 Tom Moss was born and raised in Marco Island, Florida being a fourth generation Floridian. He was awarded a full athletic scholarship to attend college and play football for the Bowling Green State University Falcons. While there, he was a member of the 1991 Mid-American Conference Championship team that won the California Bowl and the 1992 Mid-American Conference Championship team that went on to win the Las Vegas Bowl.

Upon graduation and passing the bar, Tom began his career as an associate attorney with a firm in Orlando.  Tom joined Sawyer & Sawyer, P.A. in 2003. His practice focuses on the areas of Estate Planning, Guardianship, and Estate Settlement including Probate and Trust Administration. Tom is a member of the Orange County Bar Association and he formerly served as Co-Chair of the Estate, Guardianship and Trust Law Committee section.

Tom met his wife, Cary Moss, Managing Partner of Sawyer & Sawyer, P.A. at Stetson University College of Law and he enjoys sharing a practice with her. When not at work, Tom volunteers as a Football Coach for his sons’ teams at The Foundation Academy. He also enjoys traveling with his family and outdoor activities, especially fishing.