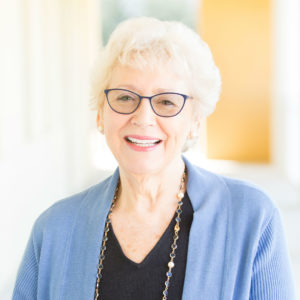 Carolyn Sawyer founded the firm with her husband, Thomas G. Sawyer, M.D., J.D. in 1994 to focus on the area of Elder Law.

Carolyn was born in Dallas, Texas and graduated from Southern Methodist University in 1964 with a Bachelor of Science in Physics. After receiving her Master of Science in Physics from Rollins College in 1975, Carolyn was the Chief Radiation Physicist of Orlando Regional Medical Center until 1990. She was board certified in Therapeutic Radiation Physics by the American Board of Radiology in 1983.

After her successful career as a healthcare professional, Carolyn decided to pursue a law degree, graduating from Stetson University College of Law in 1993. As Senior Partner, Carolyn practices in the areas of estate planning, probate, trust administration, guardianship, Medicaid planning, planning for Veteran’s Administration Benefits and special needs trusts. Carolyn was board certified in Elder Law in 2003.

During her distinguished career, Carolyn has been published in the Stetson College of Law Review on Reverse Mortgages and was invited to speak on the topic at the National Conference of the Association of Elder Law Attorneys. She served as Chairperson of the Elder Law Section’s Committee on Elder Abuse, Neglect and Exploitation and lectured on the topic at the Elder Law Certification Review.

Given her passion for protecting the elderly, Carolyn helped develop and sponsor several annual multidisciplinary workshops on Elder Exploitation with the Florida Office of the Attorney General. She also participated on a committee with Florida House Representative Kathleen Passidomo to develop landmark legislation on criminal elder exploitation, which was signed into law in 2014. Additionally, Carolyn was the recipient of the 2009- 2010 and the 2013-2014 Charlotte Brayer Public Service Award.

Carolyn is a member of the Elder Law Section’s Legislative Committee as well as the Elder Law Certification Committee. Additionally, she served as a Trustee for the West Orange Health Care District for six years. In her free time, Carolyn enjoys reading, learning to draw and spending time with her husband, Thomas. Carolyn is also a proud grandmother of 17.